After the Baikal Seal, found only in Lake Baikal, we’re going to take a look at very different mammal: the Snow Sheep (Ovis nivicola).

Closely related to the North American BigHorn Sheep, this animal is a tough-looking ruminant that lives up in the rocky mountains of North and Central Siberia.

Not much is known about the Snow Sheep. It’s sturdy, that’s for sure, and quite common in areas that humans are less frequent. Those animals that do live in groups close to human settlements run the constant risk of being hunted and poached illegally.

Although four subspecies have said to exist, official recognition of these is still underway. Living up over 1,700m of altitude, in deep snow in winter and steep cliffs in summer, it’s not the easiest mammal to study. They eat grass, moss, lichens and willow roots. Apparently, their lifespan is much longer than other wild sheep species.

During the winter they forage under the snow for anything edible and walk by stepping in exactly the same spot as the sheep before them. They live in groups for safety, and groups will stay in the same areas for years, sometimes several generations. 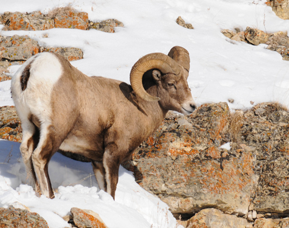 Not only research is hindered by the harsh habitat they live in – even predators have a hard time hunting the Snow Sheep. Wolves, wolverines, brown bears and lynx all eat Snow Sheep, but very very sporadically – only 5% of wolves’ prey is Snow Sheep.

As you can see, photos are really hard to come by on the web. Have you ever seen a Snow Sheep? If so, we’d love to hear from you! Comment here or on facebook and share your experience 🙂

2 thoughts on “The Snow Sheep”